The IT world is continually evolving. In the last few years, we have witnessed a shift from PCs to mobile devices, in both number and usage. Content is also more distributed than ever, and forensics investigations will not only involve a single isolated piece of hardware, but rather a set of logical and physical entities, using a wide range of unceasingly changing technologies and devices.

Business activities such as financial transactions, file sharing, and data accumulation are moving online under cloud storage. With all its benefits such as providing centralized systems that made data accessible anytime and anywhere, the digital world also has its self-created problem— cybercrime. Every year, the cybercrime rate is increasing exponentially, and the scenario demands better crime detection and protection, to meet the increase in the number of Digital Forensic agencies. In the past two years, there were enough examples where highly reputed companies were hacked, all of which ultimately resulted in enormous losses.

The competition among Digital Forensic agencies to attract major business enterprises have increased, though strict regulations are set by the boards such as Scientific Working Group on Digital Evidence (SWGDE) and the National Institute of Justice (NIJ). Considering the competition in the Digital Forensics space, our panel of renowned CEOs, CIOs, VPs, with the Enterprise security magazine editorial panel has recognized the top drawers of 2020 in the field.

We present to you, “Top 10 Digital Forensics Consulting/Service Companies - 2020.” 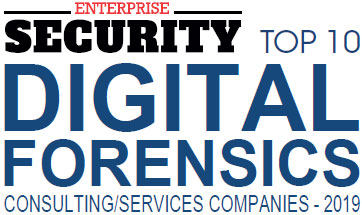 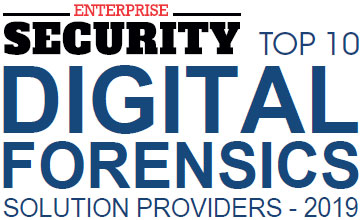 Our subscribers nominate the companies with whom they have collaborated and gotten results. If you think there is a company that deserves to be on our upcoming prestigious annual list of Top 10 Digital Forensics Consulting/Services Companies , please write to us about them and the reasons you think they need to be on the list

Your nomination request for upcoming annual list of "Top 10 Digital Forensics Consulting/Services Companies " has been Successfully Sent . We will be in touch with you shortly.

ESI Insight develops a tailored scope of engagement by understanding the type of evidence that is being sought—such as text, email, pictures, or a combination of all these—from the devices. Based on the client’s response, they develop a well-defined search protocol and gather relevant data, either by visiting the client’s location or remotely using specialized tools. This focused approach allows ESI Insight to perform more targeted investigations, minimizing the time spent on irrelevant sectors and ultimately saving time and money

Forensic Discovery is a digital forensic services firm in the legal industry that specializes in eDiscovery technologies, including computer and mobile technologies, to support and enhance early-stage legal discovery. This includes computer forensic collection, computer forensic analysis, eDiscovery technology, early case assessment with NUIX, and Expert Witness-related work. Forensic Discovery assists in nearly all aspects of computer and mobile forensics. The company has the tools and expertise to help clients and their IT teams properly execute a "duty to preserve" requirements. This collaboration allows the Forensic Discovery team to provide forensic data collection on a wide variety of devices and platforms. The company has made significant investments in its forensic collection tools to provide industry-leading service and expertise for its clients

The Crypsis Group is a security advisory firm focused on data breach response and risk management, supporting clients as a trusted security advisor before, during, and after a breach. The combination of the company's deep security knowledge and proprietary technology allows it to rapidly identify, contain, and eradicate attacks for organizations. The team's experience spans security monitoring within the Intelligence Community and advising at the national security level to performing high-profile data breach investigations and leading remediation efforts. In addition, the company has built and led converged global security programs and teams for highly dynamic corporate environments

Arete is made up of an elite team of the world’s leading cybersecurity and digital forensics experts who combat today’s advanced cyber-attacks. We work tirelessly to provide unparalleled capabilities addressing the entire cyber incident life cycle, from proactive efforts including incident response readiness assessments, penetration tests to post-incident response, remediation, containment and eradication. We work in close collaboration with industry leaders and government agencies along with leading cyber security technology platforms to deliver an innovative, intelligence-based approach to solving our client’s toughest challenges

Coalfire is the cybersecurity advisor that helps private and public sector organizations avert threats, close gaps, and effectively manage risk. By providing independent and tailored advice, assessments, technical testing, and cyber engineering services. The firm helps clients develop scalable programs that improve their security posture, achieve their business objectives, and fuel their continued success. Coalfire has been a cybersecurity thought leader for more than 16 years and has offices throughout the United States and Europe

Founded in 2001, Driven quickly emerged as a technology leader in eDiscovery due to its ability to overcome its clients’ challenges of working with large and complex data sources. Products in the market at that time were simply not designed to support the growing volume and complexity associated with big data. As a technology company, Driven was able to engineer creative solutions to challenges not addressed by existing products. With a focus on maximizing efficiency, flexibility, scalability, and automation in eDiscovery, Driven leveraged best-of-breed technology to reduce the cost and risk associated with large data volumes

Iron Vine Security is proud to be one of the most trusted small businesses specializing in providing expert, certified, and cleared cybersecurity professionals to Federal, commercial and international clients. Iron Vine was founded in 2008 by three cybersecurity practitioners with the goal of creating a world- class cybersecurity company with sustainable growth for employees, meaningful work, career growth opportunities, and social purpose. At the core, what differentiates Iron Vine Security is their focus on highly-technical cybersecurity services delivered through friendly people with shared values

Precision Digital Forensics provides both professional and managed Digital Forensics and ISO Accreditation Consulting Services to government and commercial organizations across multiple verticals. The firm’s ISO accreditation consulting services are offered through their sister company, Accredit-IT. The company’s service offerings mobilize the right people, skills and technologies to help organizations improve their performance and quality operations. PDF is a proven performer in solving mission critical and complex staffing, technological, data management, and digital forensics issues. As a CVE certified SDVOSB, PDF is committed to excellence and to creating reliable, innovative and flexible solutions for their clients